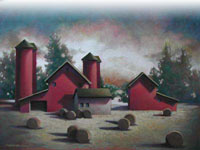 tructure: the anatomy of a building.

A modern portal frame building relies on properly designed joints to resist the bending at eaves and ridge and provide strength and stiffness. The more old-fashioned trussed buildings used additional members to control the forces on the frame and required only simple connections and slimmer columns. Good design, adequate bracing and an understanding of portal frame mechanics is key in producing a frame which is not wasteful of material but which fulfills the performance required of it. Fortunately you can leave that to us, and concentrate on selecting the more practical elements of your new building: the shape, roof pitch, bay size and purlin type.

The main advantages of a monopitch are that rainwater is discharged to one side only which is useful when attaching alongside an existing building, and that the greatest clear height is accessible to the side which is useful for certain applications that require trailer tipping.

The disadvantages are that heavier section steel is often required, and there is twice the rise in the roof for a given span, or to look at it another way you can quickly run out of headroom on a big span unless you make the high side very high indeed or the roof pitch very shallow. For example a 40' span monopitch at 12.5 degrees the roof pitch will rise nearly 9'.

Unless the building is below 25'(7.5m) span or you particularly need the height to one side you will probably be considering a building with an apex. Of course the apex does not have to be central you can offset it if you really really feel you need to. 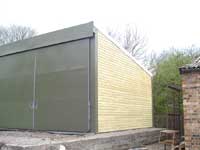 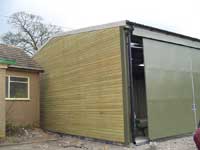 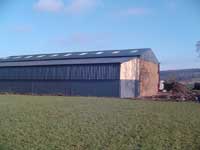 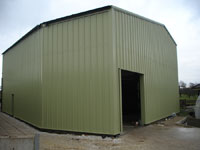 The angle of the roof is a key factor in determining the impact and appearance of a farm building and is rarely given proper consideration.

The generally accepted standard for steel framed farm buildings is 15 degrees, approximately a 1:4 rise. The minium depends on the roof material, steel sheets will work at 6 degrees and fibre cement at 10 degrees.

Agricultural buildings have pitches that range from 10 to 22.5 degrees generally in 2.5 degree increments ie 10, 12.5, 15 etc. The effect of the pitch varies with the span: the bigger the span the greater the rise relative to the eaves height, smaller buildings look better with steeper roofs which can dominate bigger spans. A picture is worth a thousand words so Click here for an illustration of various roof pitches

There are two common reasons for considering a very low roof pitch: either to meet planning requirements, especially for a large span building where the pitch has a great effect on the height at the ridge, or maintaining headroom in a lean-to. You might consider a steep pitch if you need the internal height for tipping or machinery.

Airflow in a livestock building can also benefit from a steeper pitch especially in smaller spans as the ridge is pushed up improving the chimney effect and helping to draw air through the building. 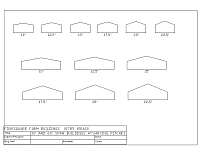 A bay is the space between two portal frames and while theoretically it can be anything, in practice it tends to be 15'(4.572m) or 20' (6.096m). If you want a bigger bay than 20' then Zed purlins are normally necessary.

Clearly the use of 20' bays means that there are fewer frames and foundation bases necessary, however the steel will often have to be a larger section, the purlins will definitely need to be heavier and the bases may need to be bigger, so there is not necessarily a cost benefit in having the longer bays.

The choice will often depend on the intended use of the building as well as other considerations such as masonry and concrete panel design, more information is available in the design notes.

Timber purlins are tanalised to prevent rotting by impregnating them under pressure to force the treatment into the grain. The chemicals used now are considerably safer than the original Tanalith process which contained arsenic and chromium. These have now been replaced by copper based compounds which are rated safe for childrens play equipment so should be ok for your livestock.

Timber purlins are cheaper than galvanised steel zed purlins particularly in 15' bays. However the longer 20' timbers can be very heavy and can often tend to sag with time especially with a fibre cement roof.

Zed purlins/rails are made from galvanised sheet steel rolled into a Z shape with a vertical leg rather than a diagonal one. They are available in a range of depths and steel thickness making spans larger than 20' (6.1m) a practical possibility. While their shape makes them very strong vertically they are weak horizontally and will sag and distort unless assembled with the correct bracing accessories - a fact which some farm building makers seem to have ignored (or be unaware of and thats all I have to say about that).

It is widely speculated that zed purlins do not go well with steel roofs because a "dissimiliar metals effect" with the fasteners produces corrosion. While we have seen a very few examples of this we have seen far more steel roofs exist very happily on zed purlins with no problems at all. We are not electrochemists and cannot say one way or the other whether the theory is correct, but we have rarely seen it happen and we would suggest that heavy condensation is a major aggravating factor when it does.

Zed side rails tend to be outside the budget as they are quite a bit more than their timber counterparts however they do make a very rigid wall when strutted and wangle braced correctly. One of the major reasons for specifying zed rails is for clean buildings such as dairy units and crop stores where timber may harbour disease. 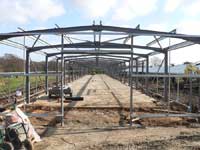 There are many factors that will influence these decisions such as and these are considered briefly in the design notes in the lefthand menu. In these notes we are merely trying to convey the factors that should be considered given the intended use of a building, not lay down hard and fast rules.

To link to this page use this url: www.farmbuildings.info/index.php?section=design&item=structure.php Copyright Paul Richmond 2012